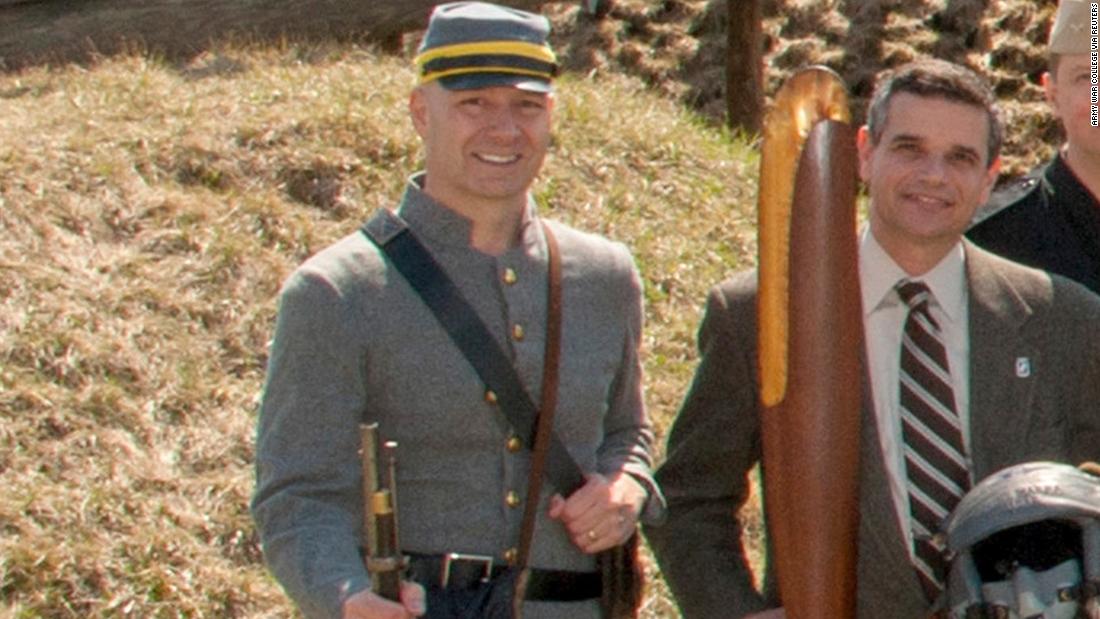 
Faculty at the school, where Mastriano worked at the time, were given the choice to dress as historical figures, people familiar with the photo told Reuters. While a few others appear dressed up, Mastriano is the only one in the photo dressed in a Confederate uniform, which many associate with hate and the legacy of slavery in the South.

CNN has reached out to Mastriano’s campaign for comment.

Reuters reported Friday that the photo was released by the Army War College after a request under the Freedom of Information Act.

The Army War College removed the photo from its wall of faculty group shots after Reuters reached out for comment, the outlet reported. “The faculty photo did not get the team’s attention; the photo has since been removed because it does not meet AWC values,” the college said in a statement to Reuters.

The flag of the Confederacy, its symbols and the statues commemorating Confederate leaders have long divided the country. Critics say the symbols represent the war to uphold slavery, while supporters call them signs of Southern pride and heritage. The symbols have been used by White supremacists, and in recent years the Department of Defense has taken steps to ban Confederate symbols.

“The College condemned him, saying this ‘does not reflect our values.’ It’s deeply offensive and proves who he is, once again. He’s unfit to be Governor,” Shapiro added.

Jenna Ellis, a senior legal adviser for Mastriano, defended the photo of Mastriano in Confederate garb in a tweet Friday, writing: “Media MELT DOWN that Mastriano apparently once posed as a civil war historical figure for a photo. And? He has a Ph.D in HISTORY. The left wants to erase history. @dougmastriano wants us to learn from it. I invite @Reuters to go on a Gettysburg tour with Doug. You’ll learn a lot!”

Mastriano served in the Army for 30 years. According to his state Senate biography, he earned a doctorate in history, taught at the Army War College and published a book on a famous World War I Army soldier, Alvin York. After retiring from the military in 2017, Mastriano launched a 2018 campaign for Congress, finishing fourth out of eight candidates in the Republican primary for an open seat in the US House of Representatives. The following year, Mastriano won a special election for his state Senate seat in rural, southern Pennsylvania.

A win for the Donald Trump-backed Mastriano in November would give someone who attempted to overturn voters’ will in 2020 power over the election machinery in one of the nation’s most important battlegrounds during the 2024 presidential race. In Pennsylvania, the governor appoints the secretary of state — the person in charge of running the commonwealth’s elections and signing off on its electors.

Shapiro, who was unopposed in the Democratic primary, has defended Pennsylvania’s 2020 presidential election result and is emphasizing voting and abortion rights in his campaign.