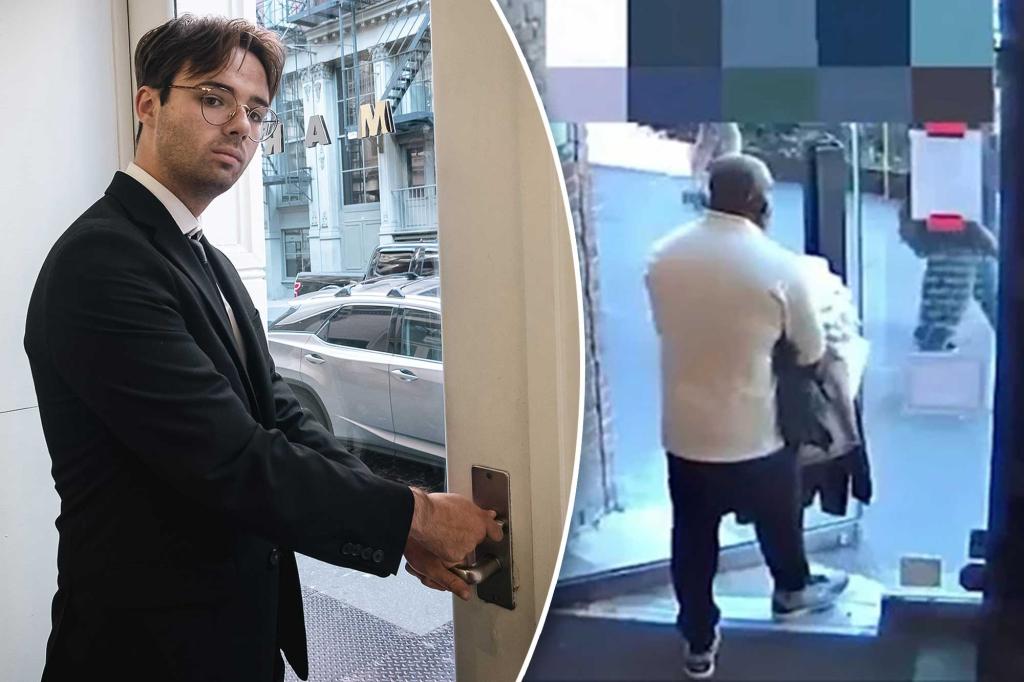 
Security guards at several high-end stores in the West Village and Soho say they feel like sitting ducks as thieves loot their stores in broad daylight with no consequences.

The two NYC nabes — and their high-end shops — have become a target for enterprising robbers, like the group of seven men and women who sauntered into the Lululemon store at 14th Street and 9th Avenue around noon Aug. 16 and made off with close to $30,000 in stolen goods.

The gang grabbed clothing and other gear and stuffed it into large sacks and a shopping cart, walking nonchalantly by a security guard who appeared on video to do nothing to stop them. One man carried a huge pile of apparel overflowing in his arms.

A number of security guards and managers at ritzy stores in the area told The Post this week that it’s almost impossible to stop thieves like the Lululemon gang.

Kirstin Aureden, a manager at Marni at 159-161 Mercer St., said she and her sales team don’t detain people who sneak out with clothes or shoes or even challenge them. “We don’t confront. We don’t follow. We just let it go.”

A security guard at the Dior store at 105 Greene St., like many who spoke to The Post, sounded defeated.

“There’s no sense in stopping people,” he said. “You don’t know what they’re going to do. Not only that, everything is insured.”

The NYPD’s 6th Precinct, which covers both the West Village and Greenwich Village, has seen crime spike 80% — fueled by a 103% increase in grand larceny and shoplifting, new NYPD data shows. The area has seen the biggest crime increase of any area in the city so far this year.

The area covering the 6th Precinct — where celebs like Sarah Jessica Parker and Jennifer Lawrence own homes — has seen 1,380 major crimes through the middle of August in 2022, compared to 766 in the same period in 2021, statistics show. Most of that crime wave stems from a huge number of grand larcenies, which include shoplifting. So far there have been 802 this year, compared to the 394 recorded over the same period last year — a 103% rise, according to the figures.

A security guard at the Apple store at 103 Prince St. in nearby Soho said he once prevented a thief from fleeing with a plastic garbage bag full of headphones but otherwise “there’s not a lot we can do.”

“You can have 15 guards but if shoplifters can’t get arrested or touched, what’s the point?” he told The Post. “We used to be able to do things but those days are over. They just run amok. It’s frustrating.”

He said he was alarmed by the stabbing at the Apple store on 14th Street in October 2021, when a guard there was attacked while attempting to enforce the location’s mask requirement.

“You gotta become a victim in order to defend yourself,” he said.

Some say the alarming rise in thefts and general crime is due to New York’s controversial bail reform laws. Under those rules, virtually all larceny suspects get released without having to post bail or bond.

Among them is booty-boosting menace Harold Gooding, a 53-year-old career crook dubbed “Recidivist No. 1” by Mayor Eric Adams, who keeps being let out of jail despite 101 arrests. Another sticky-fingered fiend, Michelle McKelley, refers to herself as a “professional booster” and has been busted more than 100 times, mostly for shoplifting.

The Soho guard, a lifelong New Yorker who did not disclose his name because he wasn’t authorized to speak on behalf of his company, said he’s become discouraged by the crime wave in the city.

“I can’t wait to retire and get out of New York,” he said. “I’m moving to Florida, where the laws still seem to matter.”

The guard said that shoplifting and burglaries at ritzy shops in Soho and the West Village have long been a problem and can’t be prevented.

A security guard at Marni said he was told not to stop shoplifters but to alert his company, PTL Security, about thefts in progress. “I’m a preventative measure,” he said. “A sense of security.”

Store managers said they’ve tried various strategies to mitigate shoplifting or smash-and-grab crimes but none of the solutions is foolproof.

“We were getting hit a lot in the spring, so now we lock the door,” said Aureden, Marni’s manager. “We only let in a certain amount of customers at one time.”

She said they’ve taken other steps to protect the merchandise, including displaying mismatched pairs of shoes — different colors and sizes — to discourage would-be thieves from snatching them and dashing out.

“There’s not a big resale of our items — people who steal want to wear our products,” she said.

Some security guards try to stop the steals — with mixed results.

“It’s been getting worse,” said manager Kyle Rhodes at Meermin Shoes at 123 Mercer St., which has been targeted by shoplifters and a smash-and-grab thief who made off with $3,400 worth of pricey leather goods after breaking in at 6:20 a.m. July 5.

“We had a shoplifter and I ran after him — probably not the smartest thing to do because you don’t know what he might have had on him.”