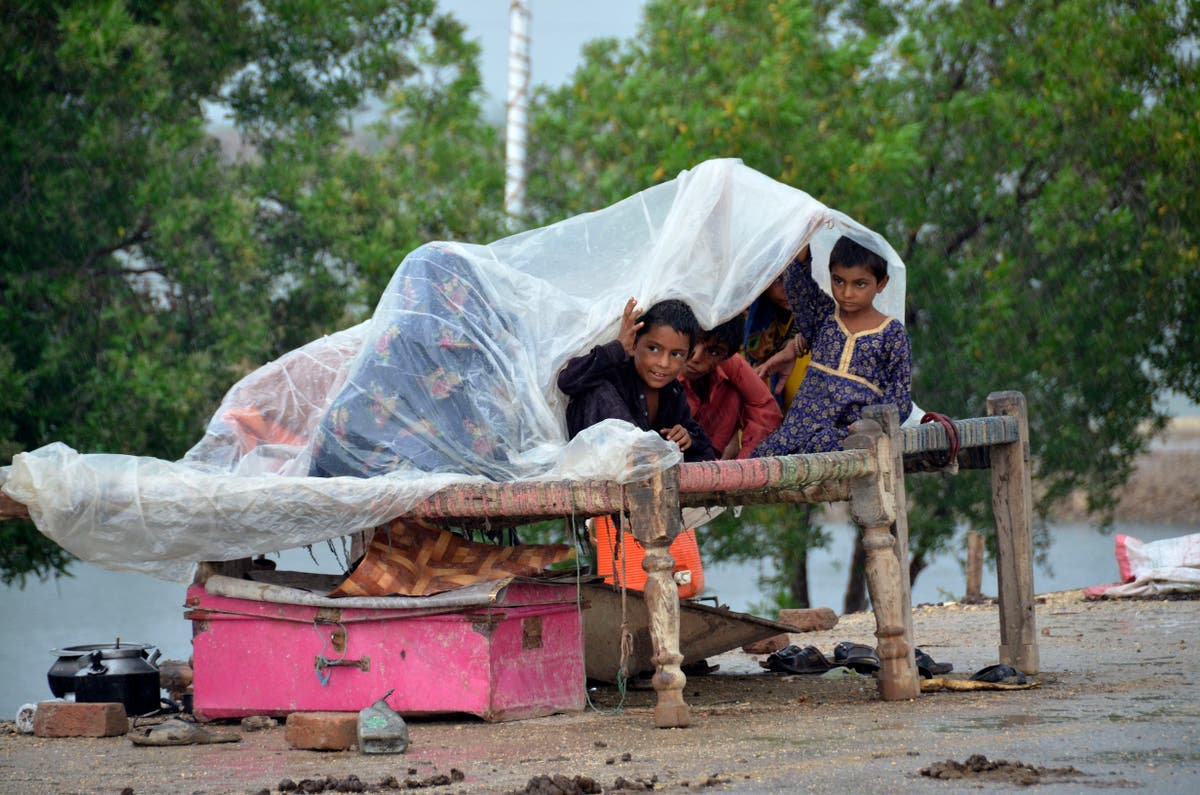 At least 45 people have died in the last 24 hours alone due to flooding in Pakistan, taking the overall toll since June to nearly 1,000.

Multiple cycles of torrential rains have hit many parts of the country since mid-June, with the government saying flooding has affected nearly 33 million people – almost 15 per cent of the population.

A national emergency has now been declared and the government has deployed the army to help the local administration cope in several provinces.

Where has the flooding hit?

Meteorologists say these provinces have received around four times the 30-year average expected rainfall during this period. Local news agencies reported that on Saturday, six more dams burst their banks in different parts of Balochistan, submerging dozens of villages and farmlands.

Information minister Maryam Aurangzeb said soldiers and rescue organisations were helping people to reach safety in these provinces as well as in eastern Punjab.

“[The] government has sanctioned sufficient funds to financially compensate the affected people and we will not leave our people alone in this tough time,” she said.

The Anadolu agency reported that the southwestern Chaman border crossing between Pakistan and Afghanistan remained closed due to heavy rains and flooding.

What is the death toll?

The National Disaster Management Authority, in its latest overnight report, said 45 people were killed in flood-related incidents from Friday to Saturday. That brought the death toll since mid-June to 982 with 1,456 injured.

The disaster management authority said that the most fatalities were reported in Khyber Pakhtunkhwa, followed by Sindh and Balochistan.

The ongoing monsoon and the floods have impacted at least 30 million Pakistanis across the country and left many thousands of others without shelter, electricity or gas. More than 600,000 homes have been destroyed.

What is being done to help?

Pakistan’s minister of climate change, Sherry Rehman, wrote on Twitter earlier this week that the local authorities were unable to help people on their own and appealed to the world community for support.

Local TV coverage has included reports of people in extreme distress, with families wading through waist-high water, holding on to their children and carrying essential items on their heads.

In several places, school buildings have been converted into shelters for the displaced.

The United Nat­ions foreign affairs spokesperson, Asim Iftikhar, said a UN flash appeal would be launched on Tuesday “simultaneously from Geneva and Islamabad”. He said the appeal was “significant, and it would trigger the international community’s response as well as bilateral assistance from other countries”.

Prime minister Shehbaz Sharif has cut short a visit to Qatar and wrote on Saturday on Twitter that he would be “visiting flood-affected areas and meeting people”.

“The magnitude of the calamity is bigger than estimated,” he said. “Times demand that we come together as one nation to support our people facing this calamity. Let us rise above our differences & stand by our people who need us today.”

Mr Sharif said the scope of the devastation caused by the floods was worse than in 2010, when heavy rainfall killed 1,700 people in Pakistan. He blamed the “horrors of climate change” for the tragedy.

Experts say that the unprecedented erratic weather, including cloudbursts and the melting of glaciers, has almost certainly been made worse by the climate crisis. “In recent decades, we never witnessed such an unusual heavier downpour in Pakistan,” scientist Shahla Gondal told the Associated Press this week, adding that Pakistan’s authorities are “ill-equipped and do not know how to tackle the disaster”.

While the UN appeal is awaited, Pakistan’s Dawn newspaper has started a fundraiser for the flood victims.

By registering, you will also enjoy limited access to Premium articles, exclusive newsletters, commenting, and virtual events with our leading journalists

By registering, you will also enjoy limited access to Premium articles, exclusive newsletters, commenting, and virtual events with our leading journalists

Want to bookmark your favourite articles and stories to read or reference later? Start your Independent Premium subscription today.

Search for survivors continues after deadly quakes in Turkey and Syria

‘Do You Find It Odd…?’ Perry Confronts Ex-Twitter Exec With Old Emails Pertaining To Hunter Biden