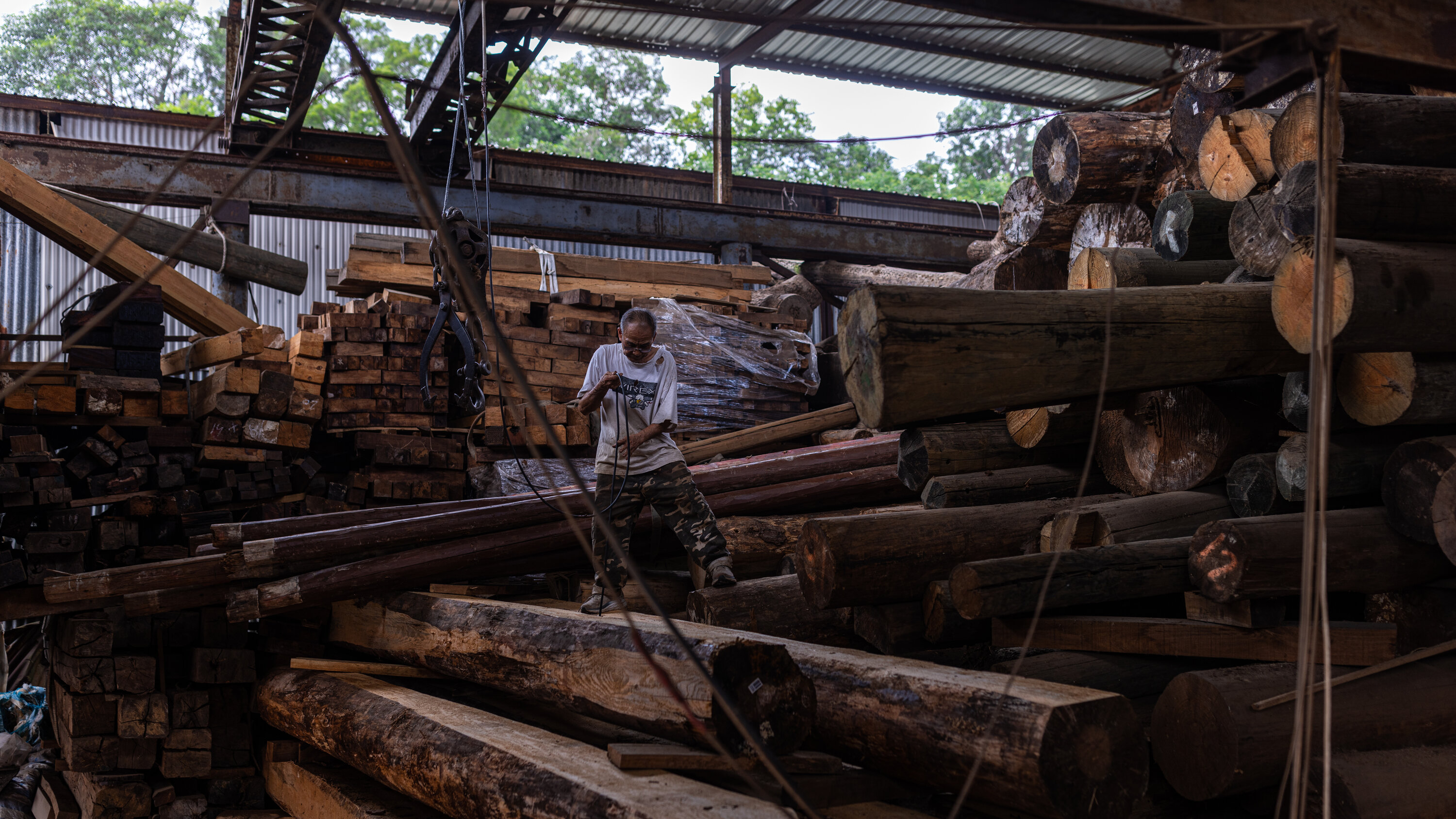 HONG KONG — From the brine-soaked docks of a ferry pier to the red-painted pillars of a Buddhist temple, many an aging wooden structure in Hong Kong has found new purpose in the hands of Wong Hung-kuen.

Mr. Wong, 73, clambered over mountains of logs at Chi Kee Sawmill and Timber on a recent afternoon, loading wood onto a rumbling crane, veins of sawdust clinging to his gloves. Nearby were the parked bulldozers that had toppled neighboring businesses. Soon, they would come for his.

Next month, Mr. Wong will have to give up the sawmill, which his family has owned since the late 1940s. It stands in the way of the Hong Kong government’s $13 billion plan to turn a quiet stretch of villages and wetlands into what it calls the Northern Metropolis, featuring tech start-ups, eco-tourism, housing for 2.5 million and easy access to Shenzhen, the city across the border in mainland China. Mr. Wong petitioned the authorities to spare Chi Kee, but in June, he said he had no choice but to shut it down.

He said he did not want to stand in the way of modernization. But he had hoped that his family’s soaring, 10,000-square-foot mill in Kwu Tung village — and the 1,000 tons of wood there, amounting to recycled Hong Kong history — could somehow be preserved.

“Wood is life, even if it can’t speak,” Mr. Wong said. “I see it as my responsibility to extend its life span and find new purpose for it.”

Since 2020, however, when a national security law was imposed on Hong Kong, protests of any kind have been rare. But since Mr. Wong said he would close Chi Kee, visitors have been coming to the mill — some to buy wood in a quiet show of solidarity, others just to see it.

One was Oscar Yeung, a young jewelry designer who makes pendants and rings from colonial-era Hong Kong coins. He sees the same neglected value in Mr. Wong’s towering stockpile of wood that he sees in his coins.

“I hope these things can stay in Hong Kong,” he said. “Once they’re gone, they’re lost forever.”

Chi Kee was named after Mr. Wong’s father, Wong Chi, a migrant from southern China, who was a cook and a rickshaw driver in Macau before coming to Hong Kong in the 1940s. He found work at a sawmill, and he sold cull lumber and firewood to people in Hong Kong’s shantytowns.

By 1948, he had opened his own mill. He began by cutting planks for commercial crates. Once he could afford heavy equipment, he began processing bigger pieces of timber, much of it from the rainforests of Borneo. Builders and carpenters turned it into wall panels, tables, benches and coffins.

Over the years, as Hong Kong grew, Chi Kee moved four times, making way for new roads and tunnels, subway stations and public housing. Wong Hung-kuen and his brother, Simon Wong, were building the current mill when their father died in 1983, leaving them to run the family business with their youngest sister, Wong Mee-kiu.

Big sawmills like Chi Kee essentially became obsolete. Some closed their doors; others became warehouses, or sold lumber that had been cut elsewhere and shipped to Hong Kong. But Mr. Wong made a name for himself as a recycler.

He looked for reusable wood in landfills, ports and country parks. He sorted through thousands of lamp posts retired by the city. About a decade ago, as the landmark Wan Chai ferry pier was being demolished, Mr. Wong recycled its dock pilings, which were embedded with shells and nails that made other mills reluctant to take on the job. Artisans saw character in the wood and turned some of it into cafe furniture.

But it was a far cry from the boom years. Since the turn of the century, Mr. Wong says, the mill has been making a fraction of what it once did, almost all of it going to salaries and the maintenance of the heavy machinery.

“We gritted our teeth and got through crisis after crisis. Now we’re old,” said Ms. Wong, Mr. Wong’s sister. She has worked her whole life at Chi Kee and watches over Mr. Wong with a fierce protectiveness. (Their brother Simon no longer takes an active role in the business.)

In 2019, the government told Mr. Wong that the site would have to be surrendered. Since then, he has petitioned various agencies in a doomed attempt to save it, even proposing that it become a museum. He was offered compensation but considered it insufficient.

As warehouses and factories in Kwu Tung fell to the bulldozers, he looked in vain for an affordable new site. The Hong Kong Development Bureau said Chi Kee had been given two extensions, which it said “should have left sufficient time for the operator to arrange removal and if necessary relocation.” It said it could help arrange to move the wood to a public facility that recycles yard waste, some of which ends up as fertilizer.

Mr. Wong is pained by that possibility. “This is valuable wood. Not waste,” he said.

Visitors gaped as they wandered around the mill, their shoes crunching on wood shavings. In the loft, a cellist was filming a music video, her brooding arpeggios mixing with the whiz and whirs of machinery.

Mr. Wong had been repurposing battered old pillars from a Buddhist temple on Lantau Island, taking out nails and sawing off rot so they could become planks, to be used again in the temple’s renovation. “This place can make you work until you collapse,” he said.

Mr. Yeung, the jewelry designer, had come looking for planks for new shelves. He ended up getting a carpentry lesson.

Mr. Wong, overwhelmed with other tasks, offered a “special price” if Mr. Yeung pulled up his sleeves and got to work. His sister, Ms. Wong, showed the visitor how to run a hand-held planer, sawdust spraying like steam.

After seven hours, Mr. Yeung was ready to go home. “This is really tiring. It’s no joke!” he said.

“You put in only half a day’s work,” Mr. Wong said with a slight smile, sipping herbal tea on a stool. “But you got a lot in return.”

He thinks young people could learn a great deal from wood. “I hope they’ll learn from its resilient nature and stay grounded and not run away from difficulty.”

Mr. Wong peeled a kiwi and fed the better half of a sandwich to Little Knife, Little Black and Siu Mai, the three mongrels who live at the mill.

“The government might treat all this as garbage,” he said, surveying his repository. “But what’s considered useless now could someday become valuable again.”