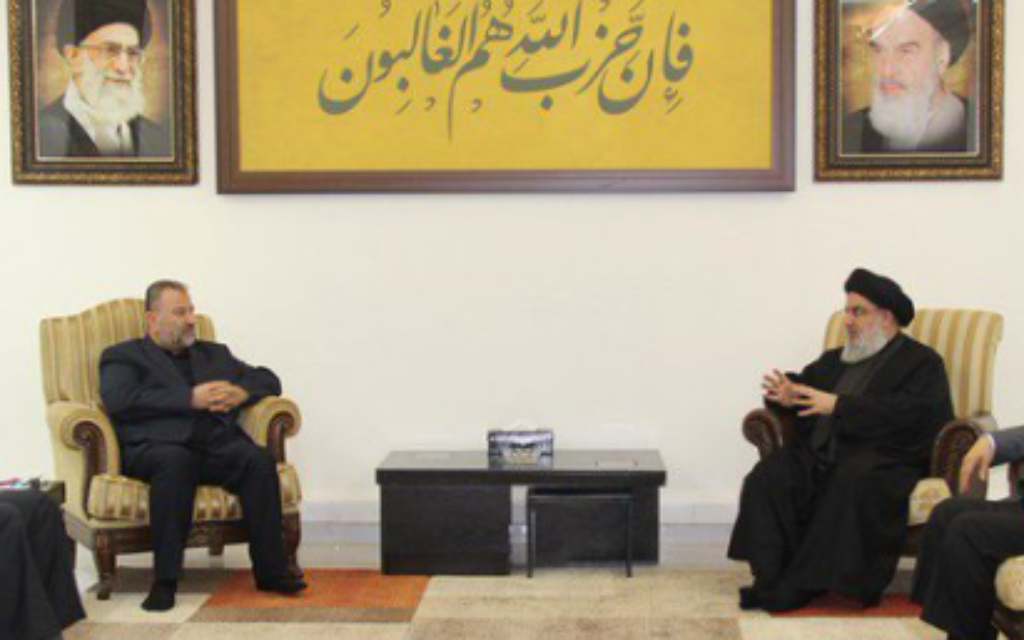 During their meeting, Nasrallah and the Hamas officials reviewed “the latest political and field developments in Palestine, Lebanon and the region, especially the recent confrontations in the Gaza Strip, the West Bank and Jerusalem,” according to a Hezbollah statement issued after the meeting.

The meeting also focused on “the possible outcome of the situation in the region, in light of [recent] developments.” 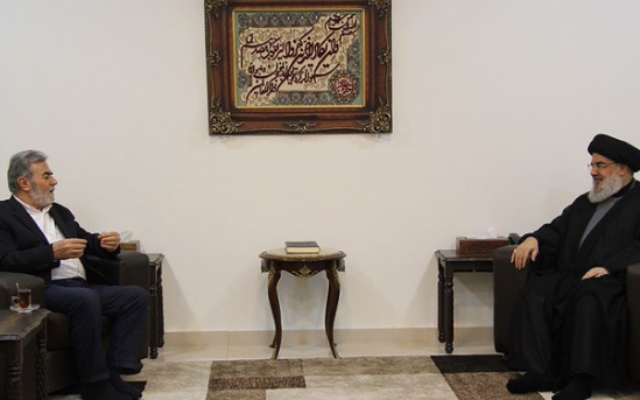 A report by the Hezbollah-affiliated Lebanese news outlet Al Mayadeen suggested that potential future cooperation between Hezbollah and Islamic Jihad was brought up during that meeting, saying the pair discussed “the expected roles of the various parties in the axis of resistance in the next stage.” The report did not elaborate on what that “next stage” could entail.

Both meetings come amid heightened tensions between Israel and Hezbollah — a Lebanese proxy of Iran — over offshore fields thought to hold natural gas deposits and repeated threats by Nasrallah that have raised concerns in Israel over a potential flare-up on its northern border.

Israel and Lebanon are said to be nearing an agreement over the maritime border dispute. But Israeli officials have raised concerns that Hezbollah may seek to carry out more provocations to create the impression that it is responsible for any concessions Israel may agree to as part of the deal.

In early July, Hezbollah sent several drones to Israel’s Karish gas field, which were downed by the Israeli military. And earlier this month Nasrallah warned that “any arm” reaching to steal Lebanon’s wealth “will be cut off.” 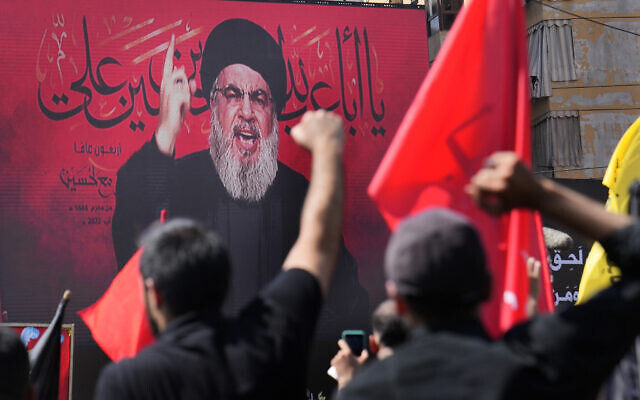 Hezbollah leader Sheik Hassan Nasrallah speaks via a video link, as his supporters raise their hands, during the Shiite holy day of Ashura, in the southern suburb of Beirut, Lebanon, August 9, 2022. (AP Photo/Hussein Malla)

The last known meeting between Hezbollah and Hamas leadership took place in June last year, when Nasrallah met with Hamas political bureau chief Ismail Haniyeh in Beirut as part of a series of high-level meetings he held around the Arab world.

Six months earlier, the two discussed what they considered to be emerging threats resulting in the normalization agreements signed between Israel, the United Arab Emirates and Bahrain in September 2020, stressing the need to stabilize the “axis of resistance” against Israel.

But the two groups have not always been coordinated and have even found themselves on opposing sides at times.

The relationship between Hamas and Iran began shortly after the former was established in 1987, mainly through financial support offered by Tehran, according to a report by the Alma Research and Education Center.

However, during the early days of the Syrian civil war in 2011, Hamas aligned itself with the rebel camp fighting the radical Shiite axis led by Iran. This eventually led Hamas to shift its alliance to the Muslim Brotherhood and consequently abandon the radical Shiite axis, leading to ongoing friction with Hezbollah, according to Alma. 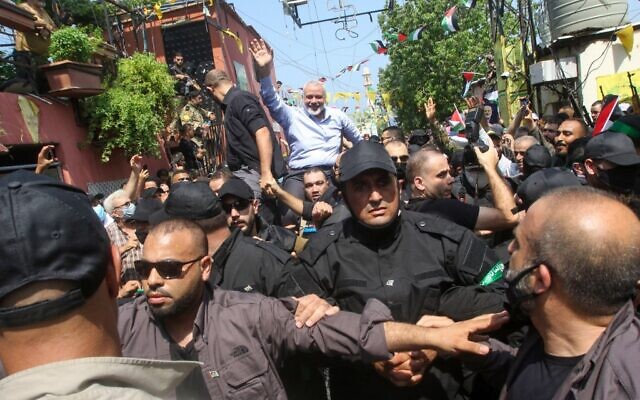 This continued for years, with Hamas regularly advancing its operational plans in southern Lebanon independently, without considering Hezbollah’s objectives or notifying it of its plans.

But in 2017, Iran and Hezbollah agreed to put their differences with Hamas aside and once again focus on their common goals — a united front against Israel.

Following a series of meetings in May that year between Hamas and Hezbollah leadership under Iranian auspices, Tehran agreed to increase its support to Hamas, which in turn has also increased its efforts to establish a military center in Lebanon.

We’re really pleased that you’ve read X Times of Israel articles in the past month.

That’s why we started the Times of Israel ten years ago – to provide discerning readers like you with must-read coverage of Israel and the Jewish world.

So now we have a request. Unlike other news outlets, we haven’t put up a paywall. But as the journalism we do is costly, we invite readers for whom The Times of Israel has become important to help support our work by joining The Times of Israel Community.

For as little as $6 a month you can help support our quality journalism while enjoying The Times of Israel AD-FREE, as well as accessing exclusive content available only to Times of Israel Community members.

Thank you,
David Horovitz, Founding Editor of The Times of Israel

Already a member? Sign in to stop seeing this