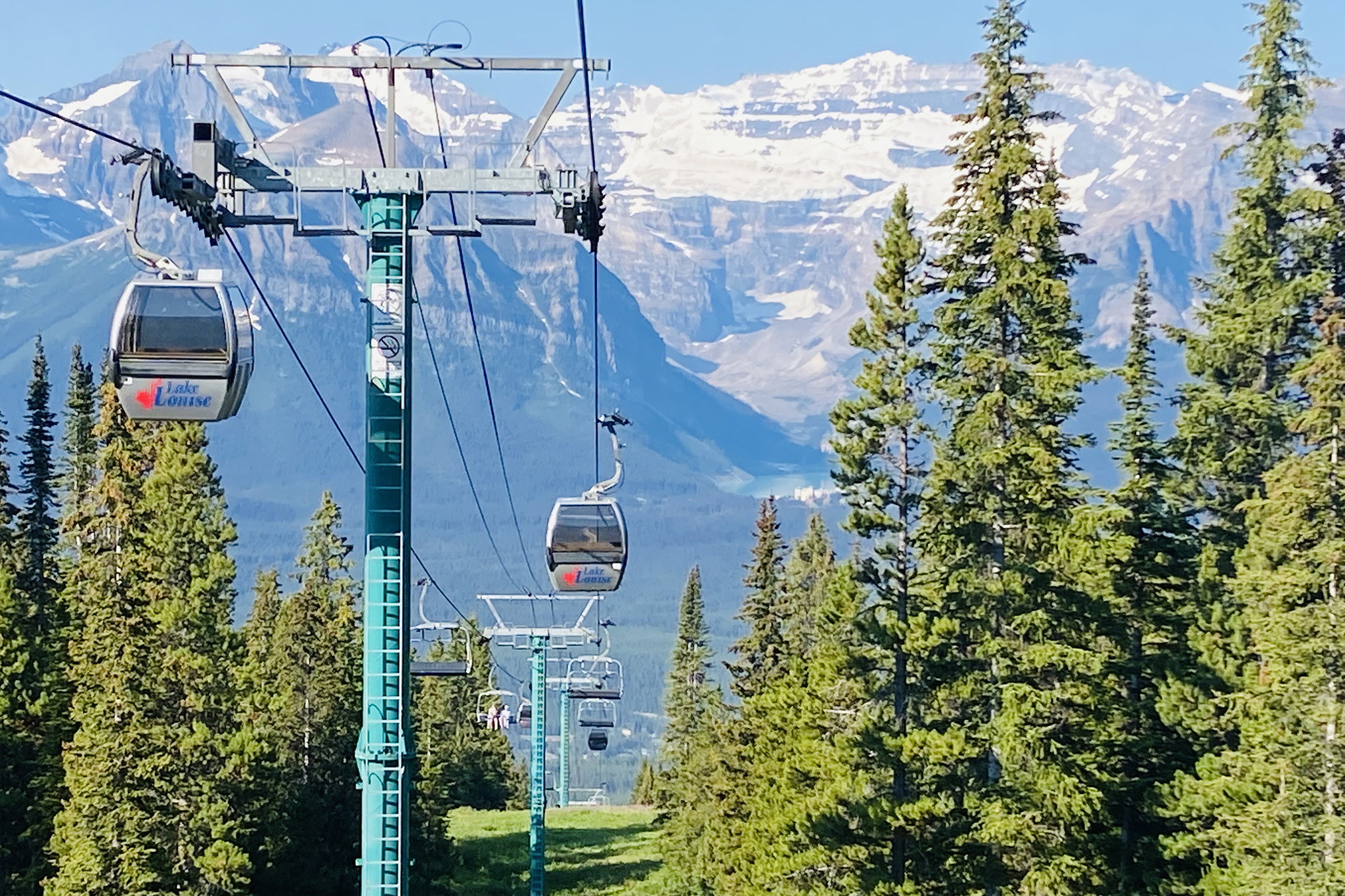 
On a ski lift rising through the Canadian Rockies in mid-July, I studied the wildflower-strewn meadows and peered between the rows of conifers, scanning for movement.

This is not just any chairlift.

The Lake Louise Sightseeing Gondola within Banff National Park is famous for floating visitors above grizzly bear habitat. This area is where visitors are most likely to see the large bears within the 1.65 million-acre park.

As I boarded the lift, an employee said grizzlies had been seen in the area nearly every day that month. There are about 65 grizzlies living in the park, and a quarter of them tend to hang out in the wilderness surrounding the lake. “Few places have so many people and bears occupying the same space,” reads lakeside park signage.

When I left Northern California for a summer road trip through British Columbia and Alberta, one of the things I was most excited about — and terrified by — was the possibility of encountering a grizzly. Although the creatures have officially been extinct in my home state since 1924, Californians have always had a thing for grizzlies, to the point where we featured one on our state flag.

There were many things I was pumped about seeing in Banff: the soaring mountain peaks, the alpine lakes in electric shades of blue and green, the dripping and undulating glaciers, the elaborate yawning cave systems. But the true reward for driving 1,000 miles across North America and back would be to see a wild grizzly, preferably from a safe distance and, ideally, from up above.

In preparing for the trip, I had dutifully purchased bear spray and learned to use it. I had booked wildlife tours in both Banff and its lesser-visited and wilder sister park to the north, Jasper. I read everything I could get my hands on about grizzlies in the region and what to do if I happened upon one. It would not be off base to say I had gone grizzly crazy.

It was still early in the trip as I coasted over the park on the Lake Louise Gondola, but already, it felt as though I was building up to seeing a grizzly. I had seen marmots munching vegetation on Mount Rainier, bighorn sheep licking asphalt in the Kootenays and mountain goats lazing around and kicking up dust in Valhalla Provincial Park. It only seemed natural that a bear would be next.

When we reached the top of the Lake Louise Sightseeing Gondola, I hesitated before disembarking. There must have been some mistake: I hadn’t seen a bear. There was a wildlife interpretative center up there, though, that required a little hiking.

When we arrived at the trailhead, I realized that I had made a colossal error: I had forgotten my bear spray in the car. The hike requires exiting an area enclosed by an electrified fence, which is there to keep the grizzlies out. A nearby sign reads: “You are in bear country.”

An employee working the chairlift recommended renting spray from the interpretive center. The large building contains taxidermy versions of all of the park’s charismatic megafauna, along with bones, antlers, pelts and footprint replicas. I asked a ranger if she thought it was really necessary to rent bear spray, and she didn’t hesitate.

I imagined how it would feel to walk around bear country with no bear spray, then handed her my credit card. Setting out on Kicking Horse Trail, the spray gave us peace of mind. There were plenty of other people hiking, too. The paintbrush wildflowers were mesmerizing, and the views of the surrounding mountains were beyond belief.

But there were definitely no grizzlies.

As the chairlift brought us down from Lake Louise, I started to lose hope. We did see one bighorn sheep chilling in a meadow, but by that time, we’d seen plenty of those.

The next day, I went horseback riding with Banff Trail Riders through the Cave and Basin National Historic Site, where the discovery of thermal springs by railway workers in 1883 led to the creation of the park, Canada’s first. We stopped near some oak trees, where the tour guide showed us claw marks from where bears had climbed up. We also heard about how horses are trained not to spook when they encounter wildlife. But no actual bears appeared.

That night, as we drove around on a wildlife expedition with Discover Banff Tours, I eagerly asked question after question about grizzly bears. They are harder to see these days than before, the guide explained, because since the 1980s, the park has been vigilant about using bear-proof trash bins (they were actually invented for Banff) and trucking its garbage out of town rather than sticking it in a landfill. That’s reduced bear-human conflict considerably and ensured that the remaining bears in the park have a healthier diet, even if food is less available.

“Now bears are chronically food stressed,” he said. “So we only have about 65 grizzlies and about 90 black bears in the park now, whereas back in the ’60s and ’70s, it was about double.”

I’m glad that Banff was able to solve its bear problem (maybe Lake Tahoe can learn something?) but my dream of meeting a grizzly was slipping away. On the tour, we saw elk, bighorn sheep (including lambs) and mule deer, but no bears — not even a black one. As we exited the tour bus, we told the tour guide we were headed up to Jasper via the famous Icefields Parkway, and he told us we were bound to see bears there.

“Keep an eye on the side of the road,” he said. “They’re everywhere.”

Three nights later, on a wildlife tour with Maligne Adventures, that guide is proven correct. There are bears everywhere, gorging themselves on berries on the side of the road. By the end of the tour, we’ve stopped to watch four subadult bears as they nose around the berry bushes, oblivious to anything beyond filling their bellies.

There’s just one problem: They are all black bears.

“I’ve seen a lot of grizzlies, but not in a few weeks,” the tour guide explains. “There were lots and lots of grizzlies in and around town early in the summer. But yeah, I bet it’s been two weeks, maybe more, since I’ve seen one.”

Apparently, grizzlies tend to move up higher in the mountains for a “midsummer protein binge,” which involves digging around for insects and overturning rocks in the scree and the rocky slopes above the treeline.

The guide can tell I am crestfallen. He points out an eaglet in its nest over Medicine Lake and a moose near the exceptionally beautiful Maligne Lake — and it’s almost enough to make up for the lack of grizzlies. Over the remainder of our five days in Jasper, I encounter three more black bears, another moose and countless elk, several of which take a lake bath right in front of me.

As we leave the park and head back toward California, I take the bear spray out of my backpack and place it carefully in a bin with the rest of our camping gear that’s no longer necessary. The road trip will be over soon, but my grizzly mission has only just begun.

“What do you think about Alaska next summer?” I say.