Maryland Gov. Hogan says “no question” there are signs of authoritarianism within Republican Party – CBS News

Maryland Gov. Hogan says “no question” there are signs of authoritarianism within Republican Party – CBS News 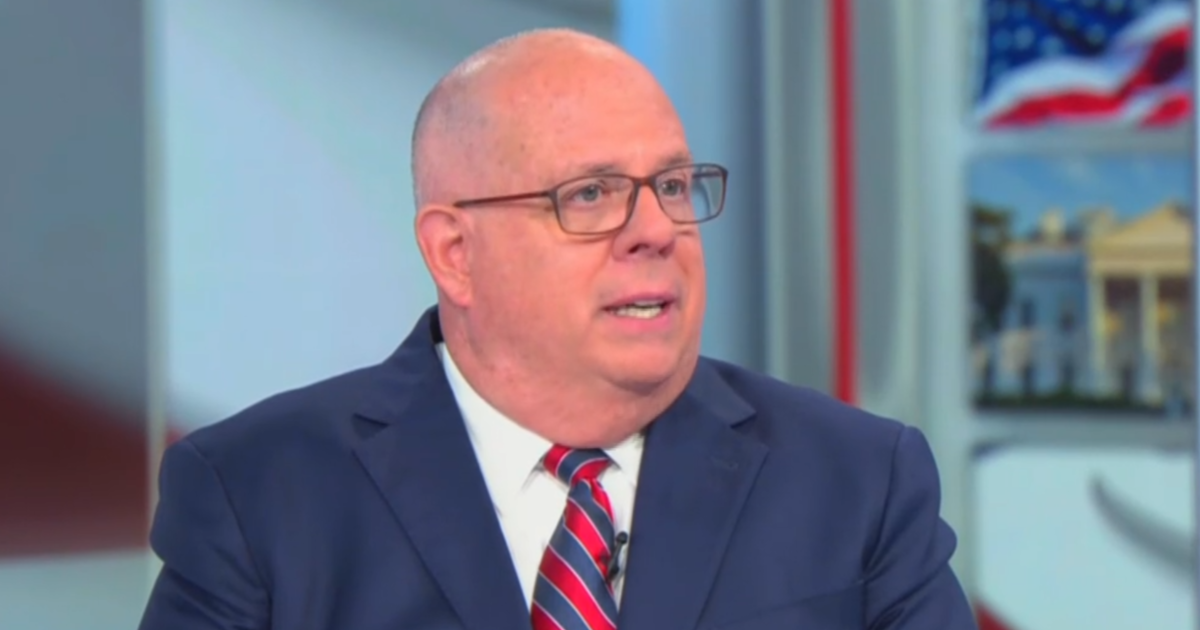 Maryland Gov. Larry Hogan, a Republican, said Sunday that “there’s no question we see some signs” of authoritarianism as members of his own party criticized the FBI’s search of former President Donald Trump’s residence at Mar-a-Lago.

“Well, there’s no question we see some- some signs of that,” Hogan said Sunday on “Face the Nation.” “And I’m, you know, one of the ones speaking out.”

Hogan was directly addressing President Joe Biden’s remarks last week, when he called on Democrats “to vote to literally save democracy once again” while speaking at a rally in Rockville, Maryland, last week. In his remarks, the president pointed to the presence of “MAGA philosophy” in the Republican party and likened that ideology to “semi-fascism.”

Hogan said that he would “like to see more transparency” into the investigation into Trump, and he suggested that more information is needed to clarify “whether or not it was justified.”


“We want to know whether or not it was justified or not. And so on the one hand, it could be, as some Republicans think, just, you know, just a political witch hunt,” Hogan said. “On the other hand, it could be really serious, you know, federal felonies. We don’t know that yet.”

“I understand why it’s dividing the country and why Democrats and Republicans view it differently,” Hogan added. In the final months of his second consecutive term as Maryland’s governor, he also weighed in on the upcoming gubernatorial race this November. Kelly Schultz, Hogan’s preferred candidate, lost the Republican primary this summer to Dan Cox, a far-right candidate endorsed by Trump.

“It was really sad,” Hogan recalled. “And it’s what I’ve been talking about for two years that, you know, this should be a really huge year for Republicans just because of the failures … of the Democrats and who are in control of everything and Biden’s low approval ratings, but we could blow it by nominating unelectable people and that’s exactly what’s happening across the country.”

Hogan is also refusing to endorse the Democratic candidate, Wes Moore, saying he is “not endorsing anyone in the race.”

“I you know, made it very clear that this guy should not be the nominee and he shouldn’t be governor,” he said about Cox. “I’m not getting involved in endorsing in the race. But this is not just Maryland. This is happening across the country. This is something that- it’s why Mitch McConnell is saying that we may not win the Senate. It’s why we were hoping to pick up seats in governor’s races and now we’re not. It’s why the margin in the House is so much smaller.”

Hogan, who has shown signs that he is considering a run for president in 2024, recently visited the early primary states of Iowa and New Hampshire, and has another trip to New Hampshire coming up. He downplayed those rumors on Sunday, saying he is “lukewarm” about a presidential campaign, and said he is focusing on finishing his term as governor.

“It’s calling what what it is what it is,” said Harrison. “We are a country built on freedom. And when you chip away at that, when you see the bullying that takes place in place like Florida with [Governor Ron DeSantis], when you see them chip away at privacy rights, when they try to demonize the other … the attacks on transgender kids and their families, the attacks on marriage equality that we’re hearing from the Supreme Court.”

“This is not who America is,” he continued. “We’re about freedom and rights for all of America’s people, not just a select few. But the Republicans are turning a blind eye … this extreme agenda, and this is what this election is all about.”

Harrison insisted Sunday that Democrats have “momentum” going into this fall’s elections, saying he believed the Democrats will gain seats in the Senate and keep the House.