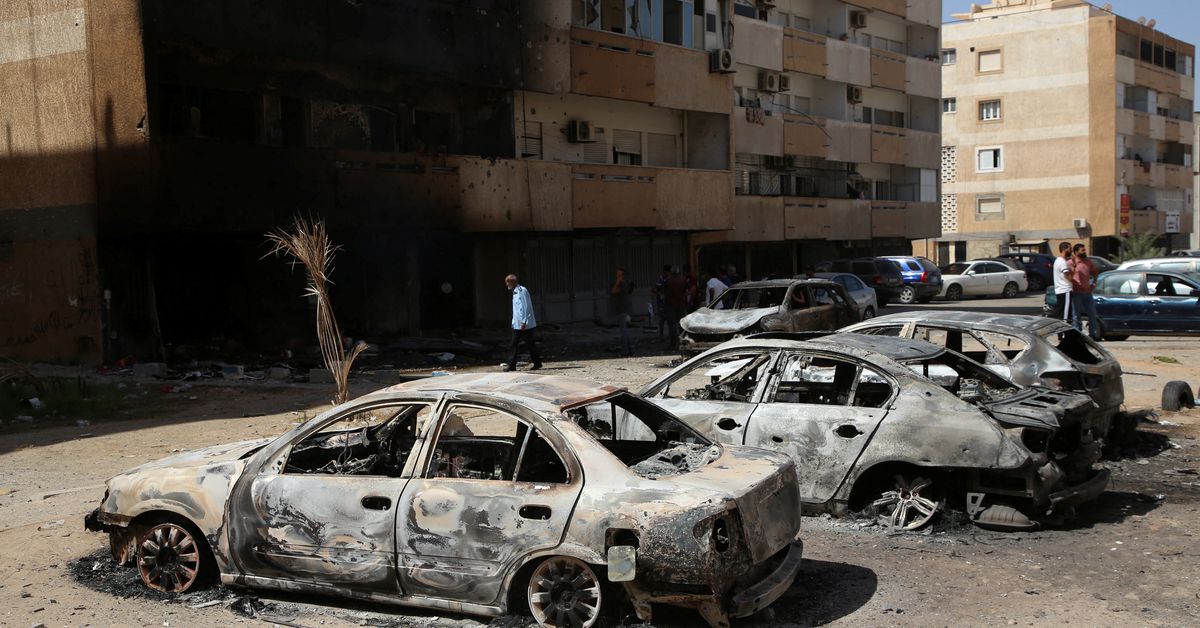 Battles raged across the city throughout Saturday as forces aligned with the parliament-backed administration of Fathi Bashagha failed to take control of the capital and oust the Tripoli-based government of Abdulhamid al-Dbeibah.

On a tour of the city on Sunday, Reuters saw workers clearing glass and debris from streets littered with spent ammunition casings, as fighters aligned with Dbeibah stood in front of bases seized from forces affiliated with Bashagha.

Traffic had returned to many roads as residents inspected damage to their property.

The clashes erupted and ended suddenly. But the brief nature of the flare up has not quashed fears of a wider conflict resuming between rivals after months of stalemate in a nation that has endured more than a decade of chaos and violence.

Libya has had little peace since the 2011 NATO-backed uprising that ousted longtime autocrat Muammar Gaddafi, splitting the nation in 2014 between rival eastern and western factions and dragging in regional powers. Libyan oil output, a prize for the warring groups, has repeatedly been shut off.

Bashagha’s prospects of seizing control in Tripoli, which lies in west Libya, appear badly dented for now but there is no sign of a broader political or diplomatic compromise to end the struggle for power in Libya. read more

The powerful eastern faction that backed Bashagha, including parliament speaker Aguila Saleh and commander Khalifa Haftar with his Libyan National Army, have given little indication that they are ready to reach an accommodation with Dbeibah.

Saleh’s parliament, based in east Libya, said Dbeibah’s government had exceeded its term and appointed Bashagha to replace him early this year after the collapse of a political process to prepare for elections. Dbeibah challenged this.

“Dbeibah looks more solid and more permanent now than he did 48 hours ago,” analyst Jalel Harchaoui said. “Haftar and Aguila Saleh have to decide whether they can live with a configuration in which they have almost no control over Tripoli.”

He said backroom negotiations could follow among main players and their foreign backers. But the rivals might also seek to build new military coalitions capable of expanding their areas of control, he said.

National elections, scheduled for last year as part of a U.N.-sponsored peace process, were abandoned amid disputes about the rules governing the vote. They now appear even further off.

U.N. Secretary General Antonio Guterres called for an immediate halt to violence and for dialogue to end the impasse.

Several groups aligned with Bashagha in Tripoli appeared to have lost control of territory inside the capital on Saturday. Attempts by other forces, aligned to him and trying to advance into the capital from the west and south, appeared to stall.

A main military convoy that set out from Misrata, east of Tripoli, where Bashagha has been based for weeks, turned back before reaching the capital.

A top pro-Bashagha commander Osama Juweili said Saturday’s fighting had been triggered by friction between armed forces in Tripoli. But he told Al-Ahrar TV that “it is not a crime” to try to bring in a government mandated by parliament.

Airlines said on Sunday flights were operating normally at Tripoli’s Mitiga airport, a sign that security had been restored for now.

The Health Ministry said on Sunday that 32 people were killed in Saturday’s violence and 159 were injured, without saying how many were fighters and how many were civilians.

Fire fighters were still trying to extinguish a blaze in a Tripoli apartment block on Sunday morning. A man standing among residents nearby said: “Who will compensate them? And who will bring the dead back to life?”