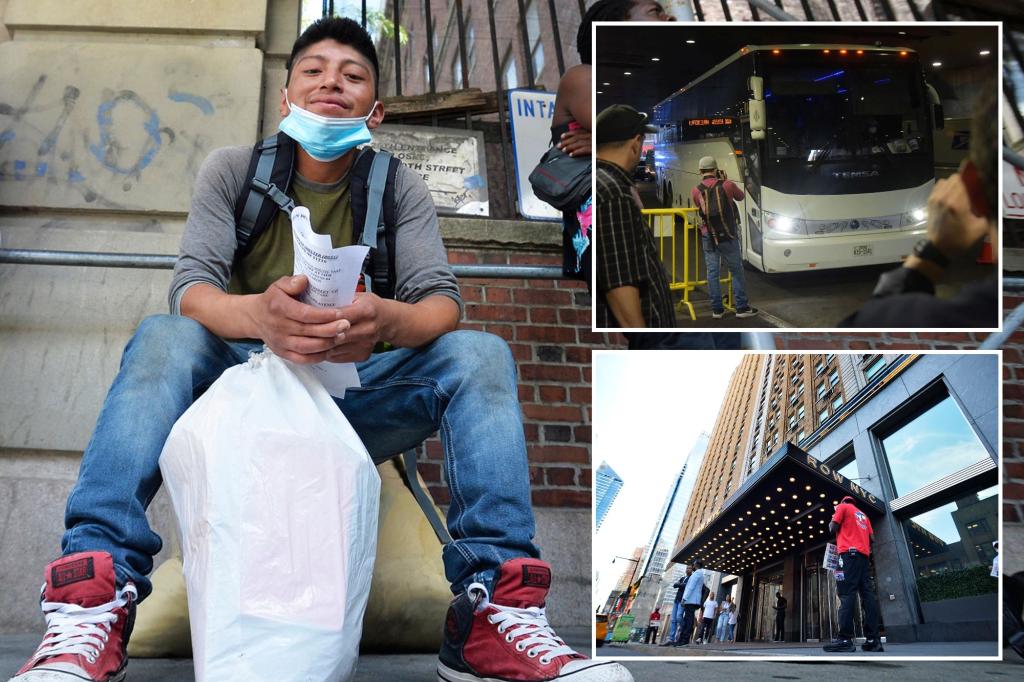 
Overwhelmed city officials are struggling to provide a promised intake center and hotel rooms to migrants being shipped by the busload from Texas to the Big Apple, The Post has learned.

The Department of Homeless Services acknowledged to The Post that it has abandoned its initial plan to operate an intake and processing center dedicated to the recent arrivals alongside a 600-room shelter at the ROW NYC hotel on Eighth Avenue in Midtown.

Officials would only say Sunday that they have finally selected a finalist to operate the-yet-to-open Manhattan facility but would not reveal the contractor’s name or its location.

Contracting documents obtained by The Post show that officials had hoped to have the Midtown shelter and intake up and running as soon as Aug. 15 — now 13 days ago.

DHS also admitted that it has yet to select and rent any of the 5,000 hotel rooms the agency said it is seeking to house migrants across the city.

Instead, officials are continuing to co-mingle migrants with New Yorkers in the city’s existing shelter system — which now includes 15 “emergency” hotel facilities to also help handle a summer population surge, according to the DSS on Friday.

City Hall has refused to say how much the city is spending on housing migrants in the homeless-system hotels, but a Post analysis found the cost could surpass $300 million.

“We were already facing a crisis of homelessness in New York City when the flow of these migrant families started in earnest,” said Josh Goldfein, a lawyer with the homeless-rights advocacy division at Legal Aid.

“We’ve always had asylum seekers in the New York City shelter system, so that is not new. But obviously, the volume increased.”

Since May, roughly 6,000 migrants have sought shelter with the city, including many bussed from Texas at the direction of the Long Star State’s Gov. Greg Abbott.

Although Mayor Eric Adams has appealed to the White House for assistance, including for financial resources, he has yet to receive the extra help he requested.

An official with knowledge of the city’s efforts said the Adams administration reached out to the United States Conference of Mayors for assistance, too.

“If Adams has not resolved this by the late fall, he will have a big problem. A failure to resolve this as the weather changes is going to be a real problem for the mayor,” he added.

“It’s a public-relations disaster, and there’s no indication that Abbott is going to stop sending people here.”

DHS spokeswoman Neha Sharma told The Post, “We are working at an extraordinary speed to bring emergency capacity online while doing everything we can to comprehensively address the unique needs of recently-arrived asylum seekers who are coming to us in their greatest hour of need.”