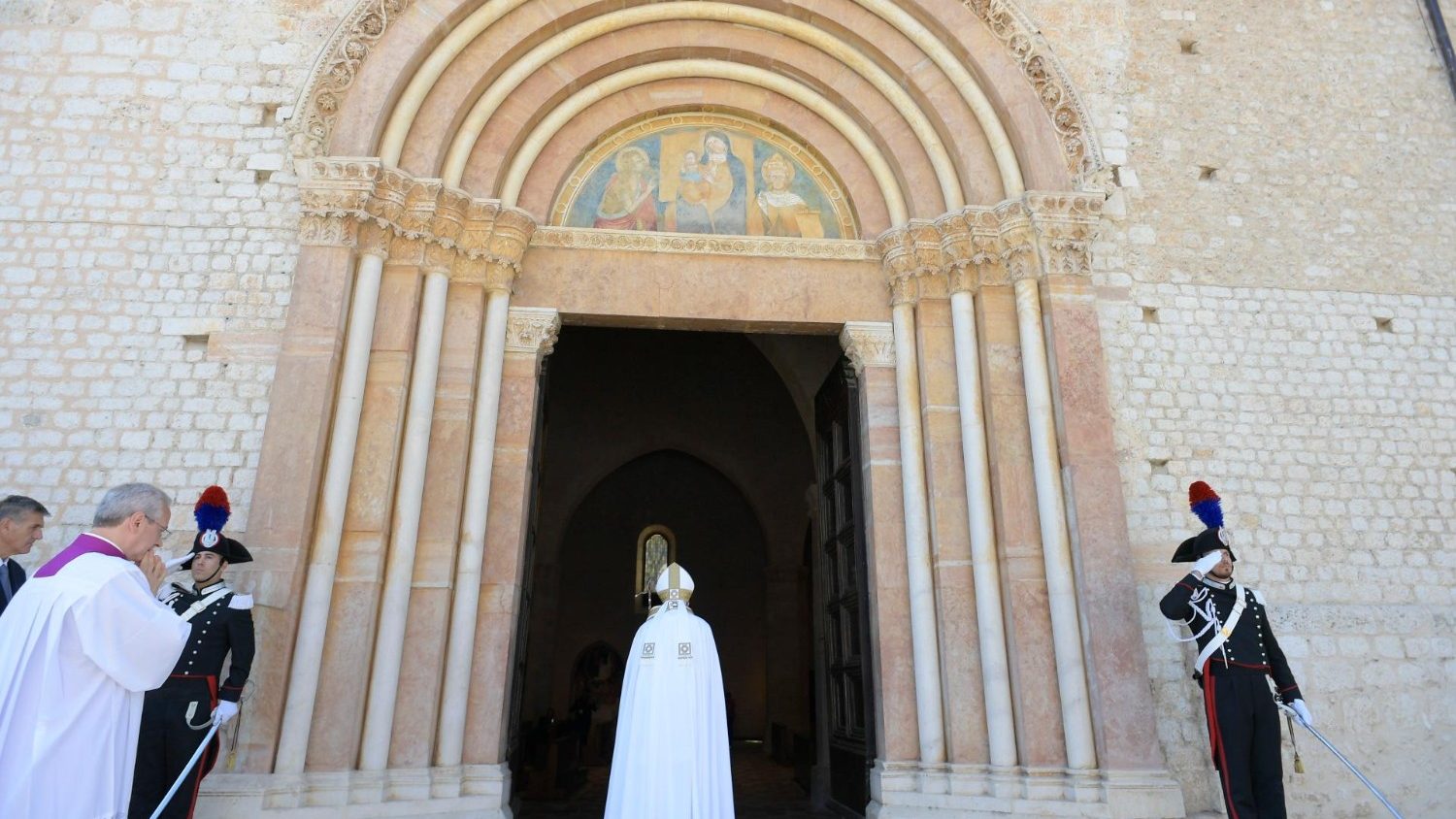 
After the leading the Angelus prayer in the square of the Basilica of Santa Maria in Collemaggio, in the central Italian city of L’Aquila, Pope Francis presides over the Rite of opening the Holy Door of the Basilica as part of the Celestinian Pardon marked annually on 28-29 August.

At the conclusion of Sunday’s celebrations in L’Aquila, Pope Francis presided over the rite of opening of the Holy Door of the Basilica of Santa Maria in Collemaggio, marking the 728th Celestinian Pardon.

During Mass in the central Italian city of L’Aquila for the occasion of the ‘Celestinian Pardon,’ Pope Francis recalls God’s power to accomplish all things, along with the …

The “Perdonanza Celestiniana” (Celestinian Pardon) is a historical-religious event held annually in L’Aquila between 28 and 29 August, accompanied by other celebrations during the last week of August.

The celebration was established by Pope Celestine V in 1294 with the issue of Papal Bull “Inter sanctorum solemnia“, also known as the Bolla del Perdono (Bull of Forgiveness), in which he granted a plenary indulgence to anyone who, confessed and communicated, visited the basilica of Santa Maria di Collemaggio from the Vespers of August 28 to those of 29 August.

The event is a precursor of the universal Jubilee of the Catholic Church established by Pope Boniface VIII in 1300.

Pope Francis travels to the central Italian city of L’Aquila, 13 years after a devastating earthquake killed 309 people, and encourages residents to continue rebuilding their lives …

As part of the Rite, Pope Francis knocked on the Holy Door three times with a staff made of olive wood, and the doors were opened for all to process inside.

He then spent time in prayer before the tomb of Pope Celestine V before exiting and greeting the faithful inside and outside. Afterwards, the Pope returned to Rome with the events concluding by around 12:30.

Before the opening of the Holy Door, Pope Francis offered the following prayer:

“Holy Father, God of our Fathers, God of Abraham, of Isaac, and of Jacob, rich in mercy and great in love who grants to the Church this time of penance and forgiveness so that she might have the joy of being interiorly renewed by the work of the Holy Spirit, and of always walking forward on your way, while remaining a sign of salvation and redemption in the midst of the world, deign to respond to our hopes: open completely to us the doors of your mercy, so that one day the doors of your heavenly dwelling may be open to us where Jesus your Son, and the first among the human race has preceded us that we might all together sing to you forever. Grant, we pray, that all those who cross this threshold with renewed commitment and firm faith might obtain salvation which comes forth from you and leads us to you.”