Crist urges Democratic donors to help stop DeSantis before he becomes too powerful. But Florida is a tough sell – CNN

Crist urges Democratic donors to help stop DeSantis before he becomes too powerful. But Florida is a tough sell – CNN 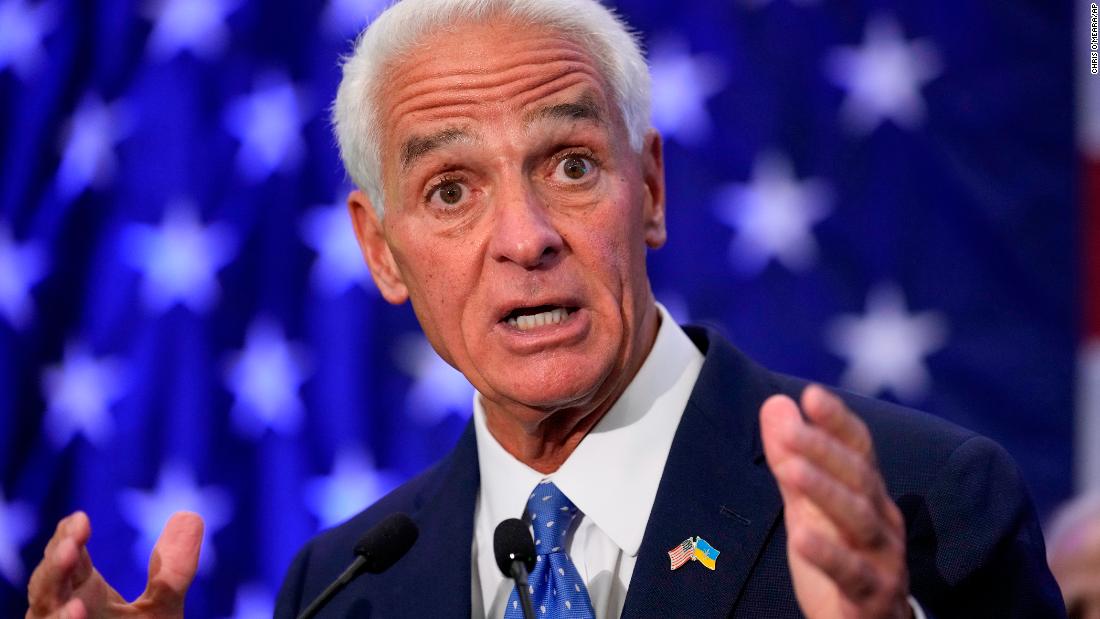 
“It is the Democrats’ last chance to stop him and it’s going to be a lot cheaper to do it in Florida than it would be in 50 states,” Crist said on CNN the morning after his victory and while repeatedly plugging his campaign website. “If you want to help (President) Joe Biden get a second term, we need to shut Ron DeSantis down in Florida.”

Crist’s plea for cash was perhaps as creative as it was nakedly desperate. After exhausting most of the $14 million his campaign and political committee raised to defeat Agriculture Commissioner Nikki Fried in the primary, Crist started the 11-week sprint to the general election nearly from scratch. Meanwhile, DeSantis has been waiting for Crist with $132 million on hand, a record sum for a governor’s race.

But Crist’s pitch was also born out of a difficult reality Democrats face in Florida. After 20-plus years of watching devastating and narrow defeats in the Sunshine State, many Democratic donors this cycle are so far taking a break from Florida. The prevailing narrative heading into the fall is that Florida has become too red and DeSantis too powerful for donors to make an investment here.

It doesn’t help Florida’s case that control of the 50-50 Senate hangs in the balance of these midterms and that there are incumbent Democratic governors in states like Wisconsin and Michigan that the party has prioritized to date over the Florida governor’s mansion. Donors are also more motivated to help Democrat Stacey Abrams challenge Republican Gov. Brian Kemp in neighboring Georgia, one Florida-based Democratic fundraiser told CNN.

Democratic Party officials are quick to insist they remain committed to Florida. Sam Newton, spokesman for the Democratic Governors Association, called Florida a “competitive battleground in 2022” and he noted the investments that the organization already made to the state party to help build the infrastructure needed to orchestrate a turnaround here.

Still, the DGA has not matched the $1 million it deposited into the political committee for Andrew Gillum a day after he won the Democratic nomination for Florida governor in 2018. From Gillum’s nomination through Election Day of that year, the DGA dropped $7.5 million into Florida. Few are expecting that kind of investment in 2022, though Newton did not rule it out.

“We’re constantly evaluating the best ways to ensure we deploy resources when they have the biggest impact,” he said.

Rick Wilson, a former Republican strategist now with the Lincoln Project, said Democrats will regret it in 2024 if they don’t view Florida’s governor race as an opportunity to slow DeSantis’ rise. DeSantis is the only Republican that polls consistently suggest would be competitive in a GOP primary against former President Donald Trump. And while Democrats know how to beat Trump, Wilson said, DeSantis could present a new and more difficult challenge.

“They will absolutely wonder, ‘What the f— were we doing?'” Wilson said. “‘Why didn’t we bloody him up? Why didn’t we nuke him? Why didn’t we make him spend $50 million?’ They don’t know how to fight.”

That may be a tough sell for donors who don’t typically think that far ahead, the Florida fundraiser said.

“I think voters care more about pocketbook issues and whether they can decide what to do with their own body or can they afford gas than if Ron DeSantis is going to run for president in 2024,” they said.

Other major donors in 2018 have not yet said if they’re financially committed to Florida this cycle. The national labor unions that contributed seven-figure sums to Gillum’s effort declined to share their plans for the fall.

“While we don’t comment on dollars, you better believe we are going to support candidates who put working people first as opposed to political extremists who opposed the president’s agenda to lower prescription drug prices and are hellbent on taking away people’s rights and freedoms,” said Nick Voutsinos, spokesman for the American Federation of State, County and Municipal Employees. AFSCME donated $1.5 million to Gillum’s effort.

The American Federation of Teachers donated $500,000 to Crist’s political committee earlier this month — half what the union gave Gillum in his race. A spokesman for the organization wouldn’t say if it will deploy another half million dollars here.

West Palm Beach businessman Daniel Abraham, a frequent Democratic donor who contributed $1 million to Gillum’s political committee, wouldn’t discuss his political giving, a representative said. Attempts to reach Donald Sussman, a megadonor for the Clintons who gave Gillum $1.5 million, were unsuccessful, but he has not yet made a contribution to Florida Democrats this cycle.

Orlando trial lawyer John Morgan, a longtime Democratic donor, said he thinks Crist has “$100 million worth of name recognition,” and therefore won’t need the kind of resources other candidates might to mount a serious challenge to DeSantis. Crist was first elected to the state legislature in the 1990s and is a former Republican governor who was the Democratic nominee for governor in 2014 before winning three terms to the US House.

Morgan gave Gillum $250,000 four years ago, but he doesn’t know if he’ll cut a check for Crist, who he once employed at his law firm.

“I don’t know what I’m going to do,” Morgan said. “I think Charlie has a very, very tough road to hoe. And I’ve pissed money away before.”

One major donor is certainly on the sidelines this cycle. NextGen America, the progressive organization funded by billionaire Tom Steyer, donated $2.8 million to Gillum in 2018. But NextGen has since halted donations to individual candidates, said president and executive director Cristina Tzintzún Ramirez. The organization also does not intend to help register and mobilize voters in Florida, as it did four years ago.

“It’s more just a question of resources,” she said. “We’d like to be in every state, but we knew we had done good work in Florida and needed to be invested in other critical senate races in other states.”

Among all the other headwinds Democrats face here is the reality that Florida — a state of 21 million people divided into 10 media markets, some of which require advertising in Spanish — is a notoriously expensive state to run a statewide campaign.

“Races are won and lost by 1 percent in Florida but sometimes it takes $100 million to get that 1 percent,” Acker-Lyons said. “But we can’t write off Florida. That’s a suicide mission as a party.”

Can the DeSantis name raise money for Democrats, too?

By framing the race around bruising DeSantis ahead of a potential race for president in 2024, the Crist campaign hopes to convince donors to jump back into Florida. DeSantis has become one of the most recognizable political figures in the country and few Republicans seem to get under the skin of Democrats more than Florida’s executive.

After Crist secured the nomination, the DGA sent out a mass message to its donor list centered around defeating DeSantis. It raised more money than any post-primary fundraising email this cycle, according to a source with knowledge of the party’s finances.

The Crist campaign believes their early pitch has worked. More than $1 million in donations flooded his campaign in the 24 hours after his primary victory. California Gov. Gavin Newsom on Thursday also pledged $100,000 to “make Ron DeSantis a one-term governor,” and he encouraged his supporters to get in the fight.

Crist’s team also notes that DeSantis only defeated Gillum in 2018 by 32,000 votes out of 8.2 million ballots cast. They don’t believe the state has dramatically shifted to the right in the four years since, even as registered Republicans now outnumber Democrats here by approximately 200,000, a total reversal from the last decade.

“In the last 22 years, the governor’s mansion has been won by low single digits,” Crist strategist Joshua Karp told CNN. “That’s not to say we don’t have a burden to prove we have a game plan to win. That’s what we’re trying to do and we believe it’s working.”

But while the razor-thin race seemed to solidify Florida’s status as a perennial swing state, it also suggested that Democrats here lack the killer instinct to push a competitive race over the top. Indeed, some Democratic donors feel snakebitten by Gillum’s narrow defeat after helping him raise $53 million, Acker-Lyons said.

“Florida being the red dot in our happy blue dance was hard for people,” she said.